What is a Fantimal? It's simple....Fantasy + Animal = Fantimal. Ok, yeah, it's a bit silly but it seems to be the perfect name for the things I'm working on.  Needle felted fiber goodness with no restrictions :)
I've been having a lot of fun making the Costume Kids and various little animals...but lately my imagination has been getting restless. I want to make animals that don't exist!

They will most likely be loosely based on a dinosaur/dragon theme, but I want to mix things up and add whatever features pop into my head. Could be cat ears...a mohawk...horns...
I have really been stifling my creativity by sticking to how things are "supposed" to look, so I'm really looking forward to seeing what happens when I just let imagination completely run the show.
The first one has already been started...I've taken a few work-in-progress photos. I'll take more pics as I work on him, and I'll keep adding them to this post.
Have a great day!! 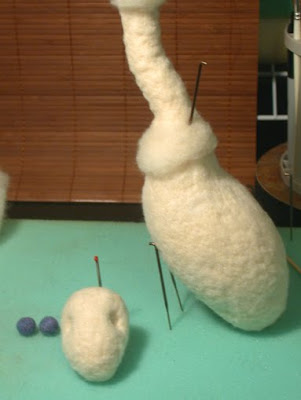 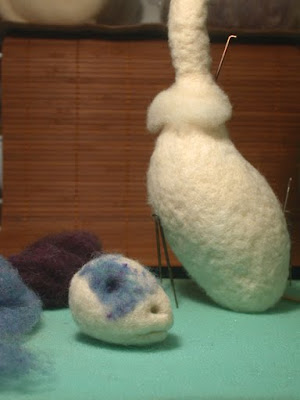 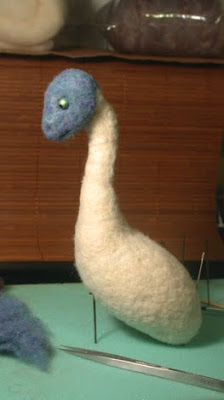 Ok I got more done! He has legs, feet and a tail...here he's just waiting patiently for his toes, which are being held captive by the evil felting needles: 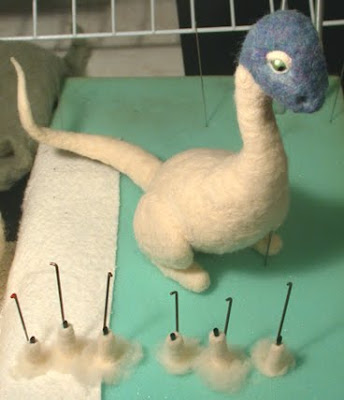 Ahh, that's better! You can see in the pic above that I had originally made six toes, but after putting only two on each foot, I decided I really liked how they looked with just two! So that's how it shall be, because there's no right or wrong with animals that only exist in my head...I'm liking this more and more. 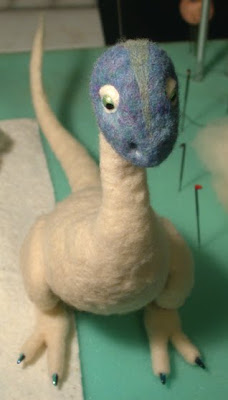 Next I'll be adding the base color to his body...it's a soft sage green that I dyed last night. You can see a little bit of it up there on his head...see that little stripe? I was impatient and had to test it out :)